If we confess our sins, he is faithful and just and will forgive us our sins and purify us from all unrighteousness(1 John 1:9 NIV).

Have you ever felt like a failure? I sure have. Jesus’ friend, Peter sure did.

Three days after Jesus breathed His last earthly breath, the disciples received the news of the empty tomb from the women who had gone to visit the grave. Mark tells us an angel told the women to go and “tell his disciples and Peter” that Jesus was alive (Mark 16:7).

I wonder why the angel singled out Peter. Could it be that God knew Peter would need an extra measure of grace and assurance because of his failure?

Can you imagine how Peter’s heart raced as his feet ran to the empty tomb? I wonder what he was thinking as he kicked up the dust. Would he be ashamed to face Jesus after denying that he even knew Him? Would he be grateful for another chance? Would Jesus even want to see him?

Peter did encounter Jesus after His resurrection. We don’t know how many times they were together or when the conversations took place, but God does allow us to witness how Jesus embraced and restored this broken “rock.”

After Jesus had appeared to the disciples and to many others, life seemed to go back to normal. Peter and John returned to what they had always done—fishing.

One morning, as the sun rose over the horizon, their nets remained empty.

A man called from the shore,

“Friends, haven’t you any fish?”

As the nets began to fill, John remembered a similar incident that occurred three years earlier, and he realized the man on the shore was Jesus.

Peter jumped into the water and swam to shore while the others hauled in the miraculous catch. After dinner, Jesus pulled Peter aside and asked him,

“Simon son of John, do you love me more than these?”

Again Jesus said, “Simon son of John, do you love me?”

He answered, “Yes, Lord, you know that I love you.”

The third time he said to him, “Simon son of John, do you love me?”

Peter was hurt because Jesus asked him the third time, “Do you love me?” He said, “Lord, you know all things; you know that I love you.”

Jesus knew Peter would fail him, and yet his failure wasn’t fatal. Jesus invited Peter to repentance and restoration. “I believe in you, Peter,” He seemed to say. “Now get back to being a fisher of men rather than a fisher of fish.”

A friend of mine carried the guilt of her past abortions around with her for years. Finally she received God’s forgiveness. “I was like Peter,” she explained. “I denied Jesus each time I walked through the door of that abortion clinic. But He has pulled me aside and asked, ‘June, do you love Me?’ And I have answered as Peter, ‘Yes, Lord, You know that I love You.’

“I had felt my failure was too grave, that I was too far gone for God to forgive me,” June explained, “but He showed me no place is so far away from His grace that He cannot save. My sin is never greater than God’s grace.”

I don’t know what sins you’ve committed in the past…but God does. He is ready and willing to forgive you of every thing you’ve ever done. Failure is not final. Failure is not fatal. All you have to do is ask.

Have you asked God to forgive you of your past sin? 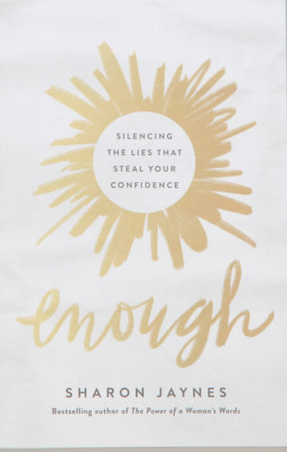 Today’s devotion was taken from Sharon’s new release, Enough: Silencing the Lies that Steal Your Confidence.

Do the voices in your head tell you that you are not good enough, smart enough, pretty enough, or just not enough, period? If so, it’s time to stop listening to the lies that sabotage your confidence and start embracing the truth of your true identity in Christ. It’s time to overcome the lies of the enemy with the promises of God. This book will show you how.

Also, Sharon has opened up The Praying Wives Club on her website. This is for women who want to learn more about praying for their husbands and join a community of Prayer Warriors. Check it out at www.ThePrayingWivesClub.com™.

This content first appeared on Crosswalk.com and is used here with permission. To view the original visit: https://www.crosswalk.com/devotionals/girlfriends/girlfriends-in-god-june-5-2019.html