When contemplating the supernatural plane, the mind conjures images of angels or demons, of streets of gold or burning flames. There is heaven and hell, both locations are briefly described in the Bible, and seem to be beyond human imagination. The terrifying images of hell are often influenced as much by church tradition and pop culture as it is by Biblical truth.

While different ideas and imagery have been common through the centuries, one of the most enduring ideas is the levels, or circles, of hell. Dark pits going deeper and deeper into the bowels of the earth to the lowest spot reserved for the vilest and most hated figures in history often dominate the discussion.

This image may have some overlap with the Biblical description of hell, but much of it comes from man’s imagination. Understanding the misconceptions about hell and why it exists can be motivating for many to share the Gospel and tell others of a better eternity. 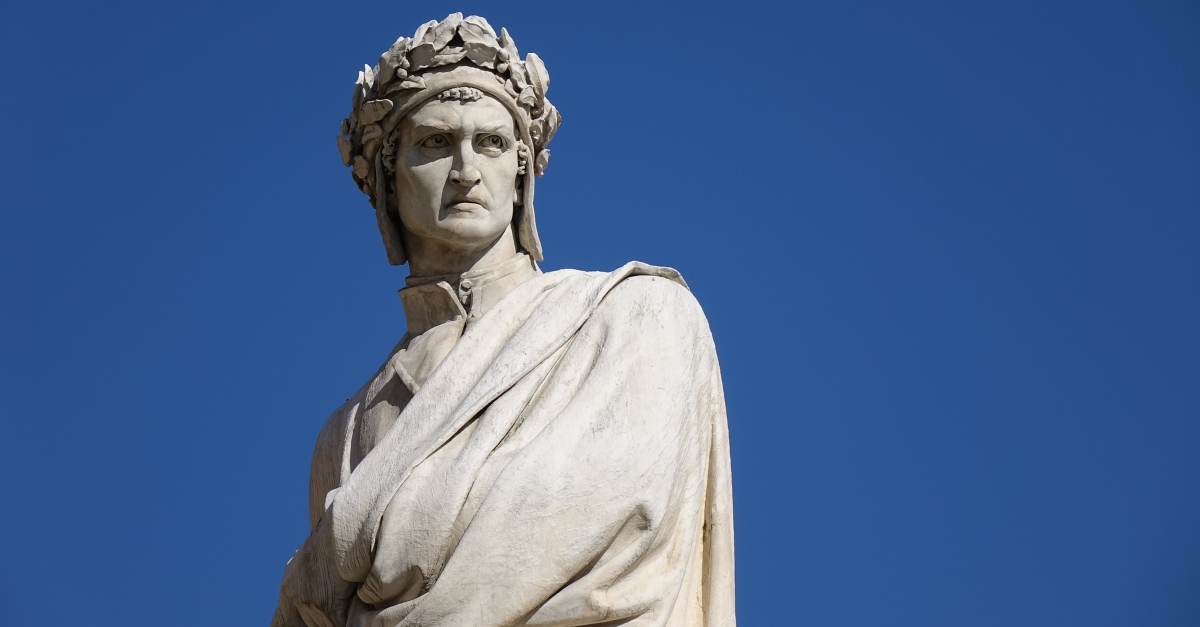 Where Did the Idea of Levels of Hell Come From?

While there are a variety of sources that portray hell as a place of levels, where different sin is punished according to its nature, the most influential and prominent one comes from Divinia Commedia, or the Divine Comedy by Dante Alighieri.

This narrative poem took twelve years to write. It is a masterwork of literature, with vivid imagery, well-constructed verses, and even interesting mathematical and scientific themes. It tells the story of the writer, Dante, searching for his dead lover Beatrice while exploring the three realms, Inferno, Purgatorio, and Paradiso. In English, those are hell, purgatory, and heaven, or paradise.

While all three literary works are excellent, the Inferno captured the world’s imagination in an enduring way. Here, the circles of hell are laid out as nine circles, each punishing greater wickedness, until Dante and his guide, the poet Virgil, reach the center of the earth:

- Limbo: The unbaptized and the virtuous pagans; similar to earth, but sufferers live in sorrow for being forever separated from God.

- Lust: People who committed lust-driven sins like adultery and fornication; the souls are blown about in a terrible storm without rest.

- Gluttony: The overindulgent sinners; forced to lie in freezing slush.

- Avarice and Prodigality: The place for the greedy and the ungenerous; they must smash heavy weights together again and again.

- Wrath and Sullenness: Those who were always angry or gloomy; the wrathful must engage in eternal fights while the sullen are always sunk beneath the river Styx.

- Heresy: These souls spoke or acted against God or the church; trapped in flaming tombs.

- Violence: Those who committed violence against others, property, themselves, as well as con artists; immersed in boiling blood.

- Fraud: All types of fraud are punished here including seducers, false prophets, and sorcerers; they run back and forth while being whipped by demons.

- Treason: Here, Judas, Brutus, and Cassius are in the jaws of Satan, frozen in a lake of ice.

Dante’s version of hell punishes the unrepentant sinner in a manner that is fitting their sins. For those who confessed and repented before they died, their souls labor in purgatory to be freed of their sins – eventually.

This version of hell is more influenced by Aristotle than by the Bible, with the punishment fitting the specific crime, as well as by implying that people are only guilty of one specific sin over all others. In fact, Dante’s entire trilogy is not meant to be taken literally. It is an allegory for the Christian journey towards God.

The inferno is where the soul recognizes its own sin, rejecting it and turning away from it and towards God. Dante emphasized this by having the journey through hell being the only journey downwards; after the ninth circle, the other two climb upwards. Purgatory represents the penitent Christian life, striving to repent of sin and be more holy. Paradise is the achievement of going to God, and finally ascending to be with Him.

While it is a powerful image, the inferno of Dante is not an actual depiction of hell, and should not be taken that way. 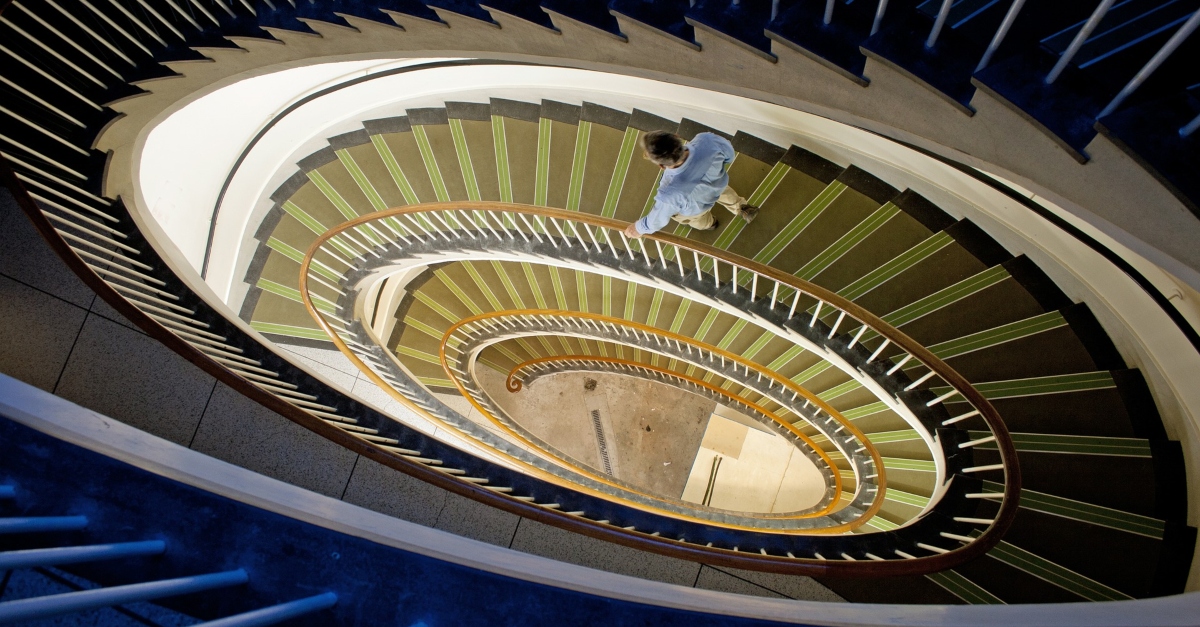 Are There Levels of Hell?

In the New Testament, the word gehenna is translated as hell. There is a small valley called the Valley of Hinnom, or Gehenna, thought to be cursed because some of the kings of Judah offended God by burning their children as sacrifices to false gods in that place. “Because the people have forsaken me and have profaned this place by making offerings in it to other gods whom neither they nor their fathers nor the kings of Judah have known; and because they have filled this place with the blood of innocents, and have built the high places of Baal to burn their sons in the fire as burnt offerings to Baal... I will make void the plans of Judah and Jerusalem” (Jeremiah 19:4-5, 7a).

The name of this valley became a word used in the New Testament, including by the Lord Jesus, to refer to a place of torment and fire.

Some places where the word gehenna is translated as hell include:

“And do not fear those who kill the body but cannot kill the soul. Rather fear him who can destroy both soul and body in hell” (Matthew 10:28). 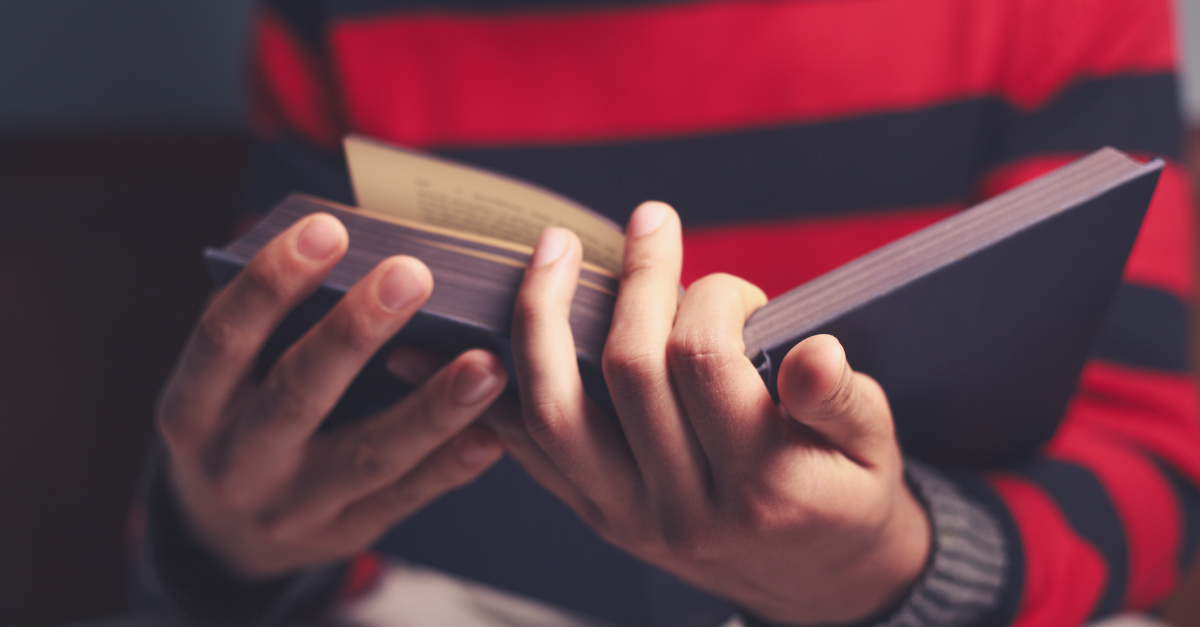 What Does the Bible Say about Hell?

Jesus spoke briefly about why hell was created, and its origins. Jesus, speaking about the day of judgment, will say to the unsaved, “‘Depart from me, you cursed, into the eternal fire prepared for the devil and his angels’” (Matthew 25:41).

Speaking to those He is sending away from His presence, Jesus acknowledges they will go to an eternal life, referred to in prophetic texts as the lake of fire. He states the purpose of hell was to punish the devil and his fallen angels. It was not created to be a place of punishment for people. However, once sin entered the world, those who chose their sin over a relationship with God could not spend eternity with God, with hell becoming the only place for them.

The Book of Revelation speaks about it as the eternal destination of souls. After the millennial reign, the Lord will finally deal with Satan, putting an end to his deceit. “And the devil who had deceived them was thrown into the lake of fire where the beast and the false prophet were, and they will be tormented day and night forever and ever” (Revelation 20:10).

In hell, there will be a lake of fire and torment. But will people be there?

A few verses later, the Apostle John wrote about the final judgment of the dead. It says, “...This is the second death, the lake of fire. And if anyone’s name was not found written in the book of life, he was thrown into the lake of fire” (Revelation 20:14b-15). The book of life contains all the names of the redeemed, those who put their faith in God. Other books that will be opened on that day include all the deeds a person committed. None of those deeds change the destiny of a soul that is not in the book of life, according to this passage. 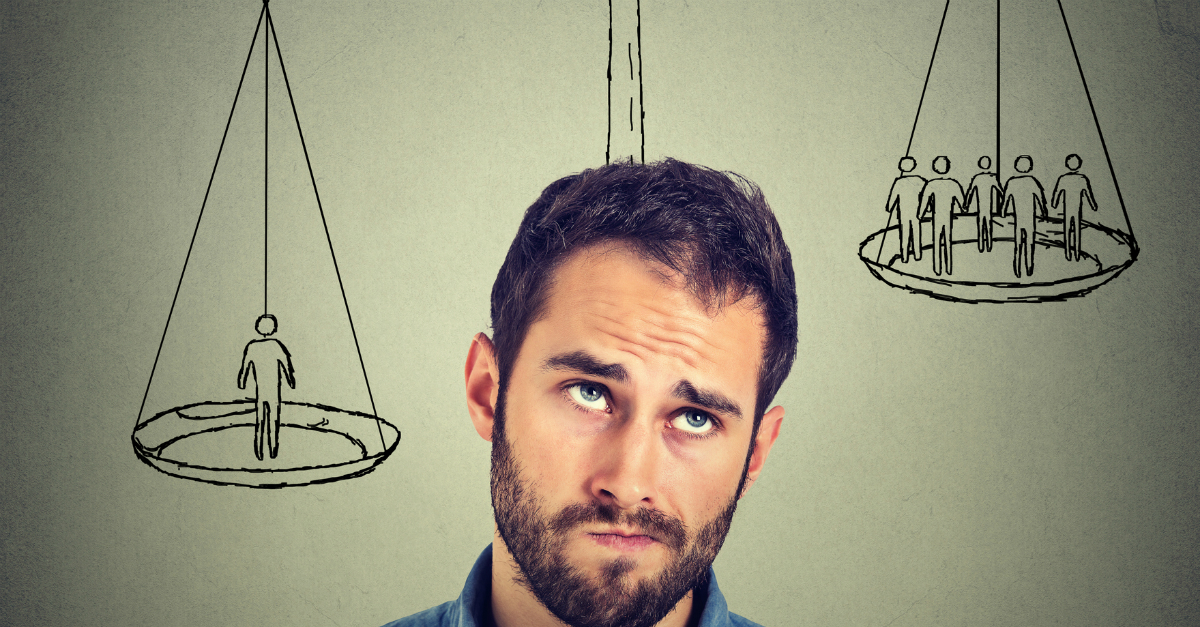 Are There Levels to Sin?

Dante grouped people by a defining sin in his portrayal, and their punishment was appropriate to their great fault. Sin, according to him, is the byproduct of giving into one’s greatest weakness – their Achilles’ heel.

The Bible sets up a different paradigm.

Instead, all sin is punishable by death and destruction in the face of a holy God. Holiness is God’s natural state; it encompasses His sanctity, righteousness, and omnipotence. It is hard to conceive of, but Isaiah gives a glimpse into what it is like for a sinner to stand before the Lord of Hosts in all His glory, in a state of sinful uncleanliness.

The prophet recounted, “In the year that King Uzziah died I saw the Lord sitting upon a throne, high and lifted hp; and the train of his robe filled the temple...And the foundations of the thresholds shook at the voice of him who called, and the house was filled with smoke. And I said: ‘Woe is me! For I am lost; for I am a man of unclean lips, and I dwell in the midst of a people of unclean lips; for my eyes have seen the King, the Lord of hosts!’” (Isaiah 6:1, 4-5).

Here, Isaiah sees the extent of his sin compared to the perfection of a holy God, and despairs, because in his own power, he cannot make himself worthy. All sin, no matter how minor it may seem by worldly standards, is an offense against God. 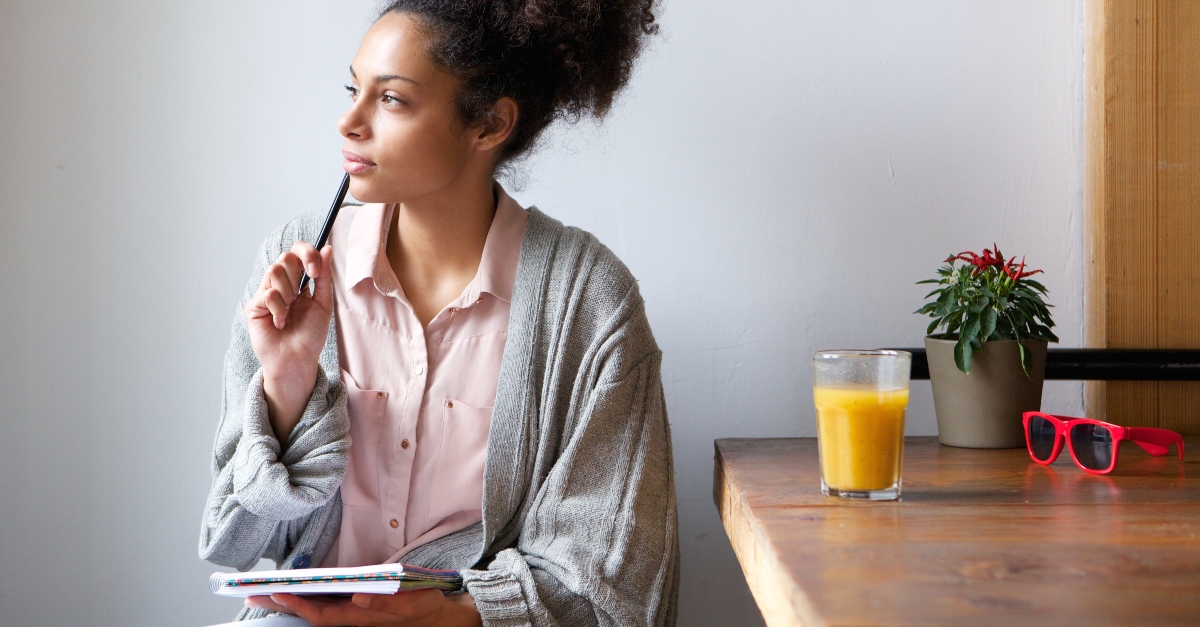 Why Should We Care about This?

Jesus spoke frequently about the coming judgment, warning about the consequences of rejecting the salvation He would give His life to provide. In the Olivet discourse, Jesus speaks in parables about what it will look like when He returns. This famous sermon includes the parable of the ten virgins and the ten talents. To those who rejected Him, Jesus says, “‘Truly, I say to you, as you did not do it to one of the least of these, you did not do it to me.’ And these will go away into eternal punishment, but the righteous into eternal life” (Matthew 25:45-46).

The Lord expresses that He does not want anyone to be separated from Him; He created humanity to have a unique relationship with them. The Apostle Peter wrote, “The Lord is not slow to fulfill his promise as some count slowness, but is patient toward you, not wishing that any should perish, but that all should reach repentance” (2 Peter 3:9). It is because of this wish and this love that God sent Jesus Christ to die, to pay the price for the sins of mankind. Those who accept this and repent and believe in Jesus are saved from their sins.

It is to provide everyone this chance at salvation that Jesus instituted the Great Commission. He called those who received the blessing of salvation to go out and share this good news to the whole world. As believers, the calling is to let everyone know that freedom in Christ, and eternity with God, is available. Christians should care about the lost because their Savior does, and He wants those who were lost to come to Him. It is the mission of the church, and part of the purpose of the Christian life. Without hope in Christ, eternity is dark, but in Christ, there is eternal rejoicing.

Edwards, Jonathan. Sinners in the Hands of an Angry God. Boston: J. Kneelands, 1772.

Jeremiah, David. Escape the Coming Night: A Message of Hope in a Time of Crisis. Nashville: Thomas Nelson, 2018.

Bethany Verrett is a freelance writer and editor. She maintains a faith and lifestyle blog graceandgrowing.com, where she muses about the Lord, life, culture, and ministry.

This content first appeared on BibleStudyTools.com and is used here with permission. To view the original visit: https://www.biblestudytools.com/bible-study/topical-studies/are-there-levels-of-hell.html