What does the Bible say about Abortion?

There is no question that the subject of abortion is a controversial topic. Nearly every day, news reports cover the fast-changing laws and the heated clashes between pro-life and pro-choice proponents. Both sides of the issue stand firm on their beliefs and rights.

Often if you are not on the side of the loudest advocates, you may feel as if you are under attack by both the world and the enemy. The world calls the choice of abortion a right, but what is the position of Christ-followers on the subject?

As followers of Jesus, our stance should align with God’s. Now, more than ever, our voice should speak truth against the enemy, and the best defense against the world and the enemy is knowing the truth found in the Word of God.

Although there are no explicit “anti-abortion” passages, the Bible is clear that God is the Creator of life and all life is precious, born and unborn. So, what does the Bible say about abortion?

God is the Giver of Life

God took the dark and formless nothingness and made all things, including man. From dust, God created the first man. “Then the Lord God formed a man from the dust of the ground and breathed into his nostrils the breath of life, and the man became a living being” (Genesis 2:7).  From nothing, He gave humanity life.

An object cannot move without applying power. Life cannot happen without the power of God, breathing it into existence. “This is what God the Lord says — the Creator of the heavens, who stretches them out, who spreads out the earth with all that springs from it, who gives breath to its people, and life to those who walk on it” (Isaiah 42:5).

Job lost everything precious in his life, yet he knew that all things, including his existence, came from God. “The Spirit of God has made me, And the breath of the Almighty gives me life” (Job 33:4). Our life and the breath that sustains us is from God, our Creator, the giver of life, and He is the only one who can take it away. To end a life given by God is to presume the position of the Creator.

The Unborn Are Fully Human

The most significant debate is about when life begins. Is the unborn child fully human or tissue? It cannot be both. When does human existence begin? Science says that at nineteen days, a heart starts to beat, and at forty days, the heart output is almost twenty percent of an adult.

In God’s eyes, an unborn child is entirely a human being. Scripture also contends life begins before birth and refers to the unborn and born interchangeably. One is as fully human as the other. For example, God reassures Jeremiah, the prophet, of his importance by showing him he was known before he was born. “God knew him as fully human before his birth. Before I formed you in the womb I knew you before you were born, I set you apart; I appointed you as a prophet to the nations” (Jeremiah 1:5).

King David wrote about how God knew him fully before he was born. “For you created my inmost being; you knit me together in my mother’s womb ...Your eyes saw my unformed body; all the days ordained for me were written in your book before one of them came to be” (Psalm 139:13, 16).

When Luke writes about Elizabeth and Mary greeting each other, he speaks of the unborn John the Baptist as a baby. “When Elizabeth heard Mary’s greeting, the baby leaped in her womb, and Elizabeth was filled with the Holy Spirit” (Luke 1:41).

To end life through abortion divides life into the unborn and born, and we learn through Scripture this opposes God’s view of both being equally human.

All Life is Precious

On the sixth day of Creation, God’s last act was to create humankind. He made man in His image and not to resemble any creature created before him. Humankind was made to reflect the image of his Creator. “So God created mankind in his own image, in the image of God, he created them; male and female he created them” (Genesis 1:27).

Biblical scholars translate the phrase “created in his own image” as “created as his image.” In other words, we are a “copy” of our Creator made to resemble Him in every way; not in appearance, God has no form, but in our heart and spirit. As all people are God’s creation and a representation of Him, all humanity is valuable to the Creator. To end the life of the unborn signifies that life is not precious and important, and to do so is in direct opposition to God’s value of His creation. All humanity is precious to God. 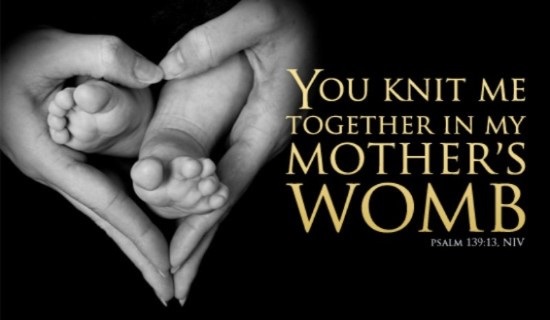 All Children Are Planned by God

In Scripture from Genesis through the birth of Christ, God has planned the births of the men and women necessary to fulfill His plan.

Abraham and Sarah were beyond childbearing age, but three visiting men said otherwise and heralded the birth of Isaac. (Genesis 18:1-2) Isaac became the father of Jacob who fathered the twelve tribes of Israel.

The prophet Elisha foretold the birth of a son to the woman who cared for him sacrificially. “ ‘About this time next year,’ Elisha said, ‘you will hold a son in your arms.’ ... But the woman became pregnant, and the next year about that same time she gave birth to a son, just as Elisha had told her” (2 Kings 4:16, 17).

Zechariah and his wife Elizabeth were too old to have children, until a day when an angel arrived to tell Zechariah he would have a son. “But the angel said to him: ‘Do not be afraid, Zechariah; your prayer has been heard. Your wife Elizabeth will bear you a son, and you are to call him John’ ” (Luke 1:13). Zechariah’s son became John the Baptist who obediently baptized Jesus.

Amid an unplanned pregnancy, parents sometimes see only the present circumstances, but God knows the future only He can see, and He has plans for every child. Jeremiah 29:11 says, “I know the plans I have for you says the Lord, not to harm you, but to give hope and a future.” He has a purpose for each of us. He knows the plans for every child, and that hope and future are thwarted when parents choose abortion.

Through scripture, we see that God is the giver of life, all life is precious, the born and unborn are equally human, and God has plans for all children. It is clear that God values every life, and to go against His will, or to sin, there will be consequences.

In the Mosaic Law, the punishment for accidentally killing an unborn child was the death penalty. “If people are fighting and hit a pregnant woman and she gives birth prematurely, the offender must be fined ... But if there is a serious injury, you are to take life for life” (Exodus 21:22, 23).

The penalty for going against God’s will, or sinning, is death. As scripture proves, God values all life, and to go against His will results in consequences. The penalty for sin is death, not necessarily physical death, but spiritual death. After an abortion, most people suffer painful consequences such as regret and depression, and often men and women turn to addiction to cope. But there is hope.

Speaking from experience, after an abortion, it’s hard to imagine that God can forgive. Shame and regret cloud the view of the path toward God’s amazing grace. The only way to see clearly is forgiveness.

If you have experienced an abortion or know someone who has, there is forgiveness and restoration. Through faith in Jesus, God forgives our sins and remembers them no more. Once we receive forgiveness of sins, they are gone. “As far as the east is from the west, so far does he remove our transgressions from us” (Psalm 103:12). The sacrifice of Jesus makes such marvelous grace possible.

The next step on the path is a new life. “Therefore, if anyone is in Christ, he is a new creation. The old has passed away; behold, the new has come” (2 Corinthians 5:17). In this new life, we are restored, and our relationship with Jesus is renewed.

I suspect the topic of abortion will remain heated until Jesus returns. It is the ultimate worldly battleground of the enemy, and the only defense for Christ-followers is the armor of God and wielding God’s Holy Word, the sword of truth.

Tamela Turbeville has a desire for every woman with a difficult past to know God loves them. She is wife to Richard, and mother to three grown sons and two beautiful daughters-in-law. When doing what she loves most – studying God’s Word, reading and writing – she is surrounded by her six rescue dogs in her small office in south Arkansas. She began Living One Word to write and share how God loves the unlovable and you can read more about Tamela, her journey, and her family at www.livingoneword.com, on Facebook, and Instagram.

This content first appeared on BibleStudyTools.com and is used here with permission. To view the original visit: https://www.biblestudytools.com/bible-study/topical-studies/what-does-the-bible-say-about-abortion.html

What Are We Thinking? - iBelieve Truth: A Devotional for Women - August 17